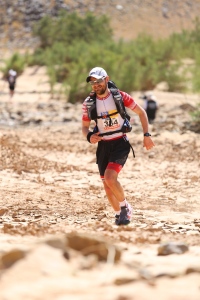 What made you want you do something so extreme and intense?

I’ve always been a keen runner and did my first London marathon in 2005, going on to achieve a PB of 2 hours 39 minutes in 2013. Taking part in the MDS had been a dream of mine since watching Ben Fogle complete it in 2004, and by 2015 I had reached a stage in my running where I was looking for a new challenge and felt that I was ready for it. I enjoy seeing how far I can push my body and what I can get out of it – and this was definitely a big push!

What was the hardest part?

The final 10 miles of Stage three were definitely the toughest for me, both physically and mentally. The terrain was made up of loose sand so it was extremely hard to move forward. At times it felt as though I was in one of those dreams where you’re trying to run but simply aren’t getting anywhere. I just had to keep turning my legs over and making very slow progress. I was so, so glad when it was done.

Was anything easier than you thought it would be?

One of the race rules is that all kit, including food, must be carried by competitors. To avoid having to carry extra weight I only took the amount of food required to meet the race’s minimum calorie guidelines. Whilst technically this was enough to sustain me I anticipated having problems as I didn’t know how my body would react once I was out there, and hunger is not something I deal well with. Thankfully I managed to judge it just right and didn’t feel too hungry at any point – which is good as there was no way to get any extra rations out to the middle of the desert. 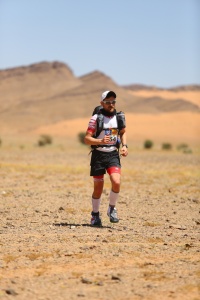 What advice would you give to someone else doing it?

Don’t just think about the mileage of your training runs, practice with weighted packs so that you get a feel for how it will be to carry your kit with you over those longer distances. Something else I found extremely helpful was to reduce the weight of my pack as much as possible. Race regulations set the minimum pack weight at 6.5kg (not including water) so try to get as close to this as possible. There’s obviously the essential kit, such as medical items and food, that you have to take, but other than that, question everything that you put in to your pack. I became quite obsessed with it – cutting labels out of items, removing packaging and even trimming the handle on my toothbrush. It might sound extreme but even an extra kilogram will make all the difference when you have to carry it for 6 days over a hundred and fifty six miles.

How would you sum up your experience?

I can honestly say that it was a truly incredible, life-changing experience. When I first thought about doing the race back in 2004, I just wanted to take part. Then I just wanted to complete it. As I trained more and more, I thought that coming top-50 might be achievable and in the end I came 21st and was the 2nd fastest Briton to complete the race. It really made me aware of what can be achieved with enough time, effort and determination. There’s something quite incredible about getting that far, in such difficult conditions, just under the power of your own two legs.